This 1 Michelin star restaurant was a pleasant find whilst staying in Puligny. Service was slow the first night and a little judgemental but the location, presentation of the venue and the food itself were enjoyable. I don’t suggest you walk in to make a booking in shorts and a t- shirt however as it would seem that books here are judged by their covers.

Arriving back to the restaurant at the appointed time we were ushered to a table just inside the main windows looking out first onto an outer dining area and thence to a park beyond. Truly beautiful on a warm sunny summer eve. The majority of customers were dining outside and we wished at that point that we had had the opportunity to decide to sit outside.

The maitre d’hotel was obviously knowledgeable about the wine of the region and suggested multiple possible choices, seemed briefly pleased to be asked her favourite. Wishing for a lighter meal I selected some local Chardonnay – purportedly the best in the world and certainly the most expensive. 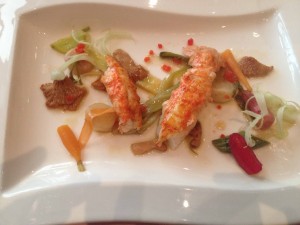 Langoustine for an entree with a lemon confit and mushroom was delightful. The sweetness of the meat and lightness of the citrus well matched to citrus notes from a bottle of Domain Leflaive “Purcelles” Puligny Montrachet 2007.

Lobster followed with another bottle of chardonnay from the superb cellar selection – I settled again for my favourite domaine but steered toward their best – Le Flaive and chose their “Chevalier” Montrachet Grand Cru 2005. Whilst obviously not local the Hommard was firm with a delicate sauce that matched well to the wine.

The cheeses were local and well presented, and suited to the dominant wine of the region with fruit bread and wafers.

Sated we asked for the cheque and were left to wait for 35 minutes. This was disconcerting as the service since being seated had been reasonably prompt. When asking tongue in cheek if I should return tomorrow to pay the bill I was informed that the staff member who processed payments would be with us shortly. After another 15 minutes I decided to go looking for them, only to see them notice me approaching and suddenly rush over with the card processor. Meal paid for; we left with a voice in the back of my mind whispering “t’would seem that patrons wait on staff at Le Montrachet, and don’t you forget it“. We walked from the restaurant taking a lovely stroll through Puligny.

Always wanting to make allowance for a off night at a restaurant, we returned 2 nights later to enjoy what turned out to be a fabulous meal. I must say that the nature of the service had changed incredibly, perhaps due to ordering a bottle of one of the best Montrachet’s in the cellar – Domain des Comtes Lafon. 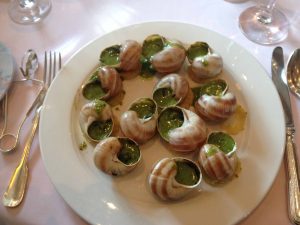 Snails for an entree (I asked a local for which dish might be a good expression of the local region he suggested I try them). The liquor in the bottom of the shells was delicious though probably only for those of us who enjoy heavy butter and garlic overtones. This matched well to the strong mineral ad citrus notes of a Ettiene Suzet Puligny Montrachet. A fine wine for such a piquant liquor and the recommendation of the previous evenings Maitre d’Hotel.

Our son didn’t order an entree and was presented a small tomato salad gratis so that he might accompany his parents in their entrees. A lovely touch on the part of the kitchen.

The beef filet was perfectly seared and matched well to a half bottle of Pinot Noir – not usually on a favourite but when in Burgundy… Some local cheeses selected to not offend the wine (the blue being left until after the wine was finished).

The chef, who had been sent a glass of the Montrachet, came to offer his compliments and also a gratis dessert and the maitre d’hotel interpreted our appreciations of the quality of food in flavour and presentation to the chef. The cheque was presented snappily, and when asked if we could retain the empty bottle the maitre de dashed off to the cellar to fetch the wooden casing to present us the bottle in. The maitre d’hotel then accompanied us to the entry and wished us bonsoir.

A lovely way to finish the night and our stay in Puligny. 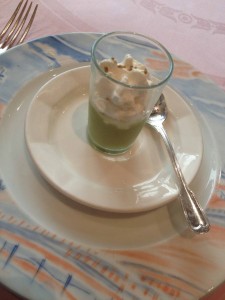 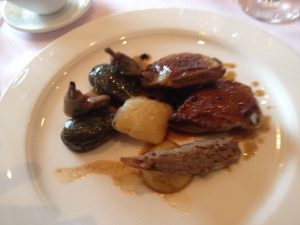 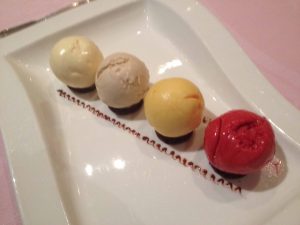 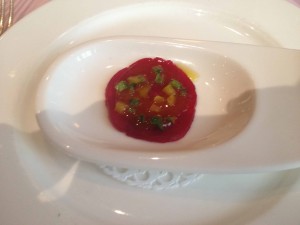 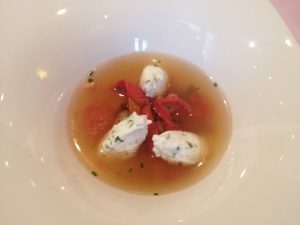 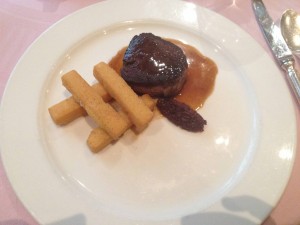