Are you ready Sydney Foodies? NOMA is coming to Town. SOLD OUT!

Foodies were crying into their quinoa and yogurt this morning when NOMA, Australia sold out within 4 minutes of tickets going on sale. The grey screen of denial looked like this as the ticketing system was put under enormous pressure with thousands of people trying to snare a seat. Considering you had to pay $485 per person up front to secure the booking, that is a pretty impressive amount of Australian moula for a Friday morning. I’m sure there are support groups forming now to help those left out. 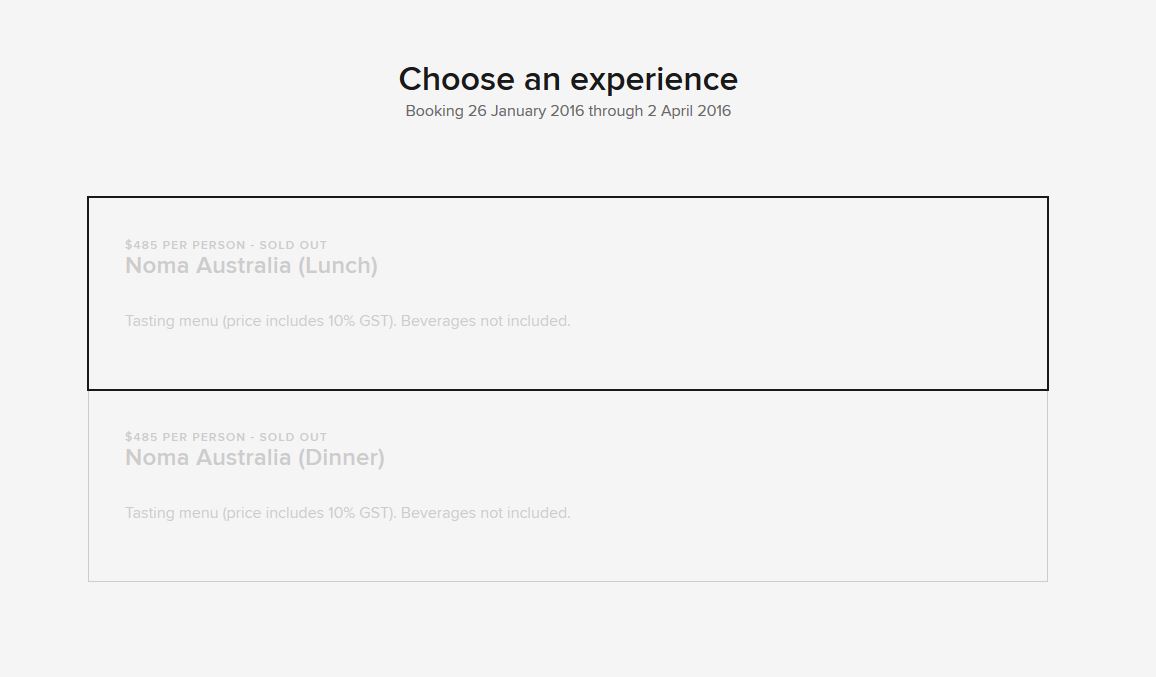 First it was Heston Blumenthal shutting up shop and moving his entire Fat Duck crew to the Melbourne Crown Casino whilst they renovated his Bray restaurant. It was incredibly exciting to think that Melbourne had been chosen over other worldly locations to host this Top ranked restaurant. It was also an experiment to see if Australian Foodies could support the incredibly costly dining experience ($500+ per person) and play sophisticated host to such food luminaries. By all accounts it has been a success with no way to get a table unless you won seats in a (rather dodgy) ballot, waited outside for a no-show or knew Heston personally.

Whilst the Fat Duck has flown back to Bray (Fat Duck Melbourne closed in August 2015), another world ranked Chef, Rene Redzepi, announced back in July that he would close his four-time #1 ranked restaurant, NOMA (currently #3), for renovations and pop up in Sydney with his entire restaurant staff – a humble 75 staff (35 chefs, 30 front of house and 10 admin) and their families in January for a 10 week stint. The pop up NOMA will be located at the recently developed Barangaroo precinct.

Chef Rene has already had his top chefs fly to Australia for foraging and exploratory expeditions to understand, research and set up produce sources for his Australian-influenced menu. In fact, his creative team will move to Sydney a month before everyone else to create “a menu that will showcase the best of what we’ve found on these trips“. Got to love his passion!

This foraging theme is central to the NOMA philosophy and evident in the recent launch of Silvereye from the mind of ex-NOMA executive sous chef (and ex-Magnus Nilsson’s Faviken), Sam Miller. It will be interesting to see what the menu looks like as they look to Australian ingredients for inspiration (succulents anyone?). Perhaps they may even find a true representation of what is Australian cuisine? I’m keen to know.

This week, Chef Rene finally confirmed the details of how to get a seat at his pop up. If you want to experience NOMA without having to fly to Copenhagen in the near future, you can try to grab a seat at 10am (Australian Eastern Daylight Time) on Friday 30 October 2015 via http://noma.dk/australia/. Be prepared to pay at the time of booking which will set you back AU$485 per person (plus 1.65% credit card fee) without drinks included (you can pay for drinks when you actually dine).

A few things to note (sourced from the NOMA website)

It is an exciting time for foodies in Australia with so much talent wanting to entertain our palettes. I care little that Tourism Australia probably helped encourage the choice of Sydney over others (Noma has already popped up in Japan), in fact it will do wonders for local and international tourism (bravo). If local hospitality staff also get a look in during this 10 week experiment and can gain experience working with the World’s best, it is also a win for our local industry.

Go forth Foodies .. and if you have a spare seat, remember who sent you! That’s Mookie … Foodie Mookie.

Mookie
A passionately positive foodie who loves travelling the world and experiencing what the best chefs in the world have to offer. Based in Sydney, Australia, Mookie also loves to dine locally and uncover great restaurants, chefs and food combinations with her #foodiemookie crew.